I've been running multiple instances of gqrx recently. Up until now, I have used an unconnected soundcard output as a sink for a gqrx receiver audio that I've no interest in listening to myself, then selecting that same output's monitor channel in Pulse Audio Volume Controller as an input for fldigi or multimon-ng, for example.

Then I ran out of unused soundcard outputs to use, but fortunately discovered pulseaudio's null-sink facility.  Now I can create a null sink specifically for each SDR receiver that I have and hook them all up to different modem programmes.

To create a null sink with a meaningful name, use a command like this:


To monitor the audio stream that is being routed to the null sink, create a loop-back: 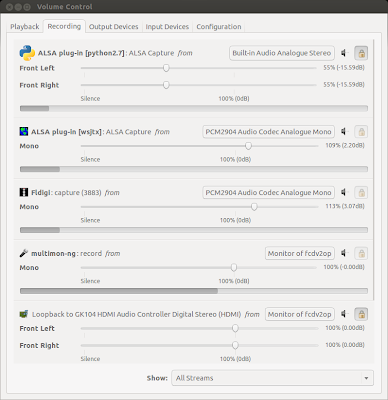 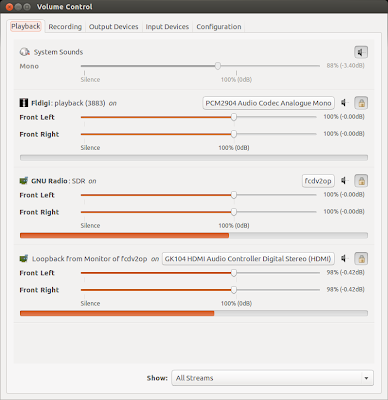 This lets me control the audio levels fed to each audio 'decoder' and the level coming out of my speakers independently. You can add a named null sink for each SDR device you have and a separate loopback device for each of them also, which you can mute and mix accordingly and route to different audio outputs if you so desire.

Edit: If you are paying attention, you may notice that the null sink name in the screen-shots is different to the one used in the command line. Oh, well, let's call that a continuity error and move on :)
Posted by g0hww at 11:01