I've just pushed the first version of OnSense up to github. OnSense is a hacktastic hybrid spectrum sensing scanner, using a combination of SDR and analogue receivers.  I've been using a HackRF Jawbreaker and an AOR-8600mk2 receiver.

OnSense can scan the entire UHF military airband in less than a second (or the VHF air band).  There are 7000 channels with 25kHz spacing between 225MHz and 400Mhz.  When I assessed the scanning speed it was roughly 666ms, that's over 10k channels per second which isn't too shabby.  OnSense is not a great piece of software yet, but its not nonsense.

I'm hoping to improve OnSense with a QT GUI and an SQLite database.

Here's a screenshot of some onsense action: 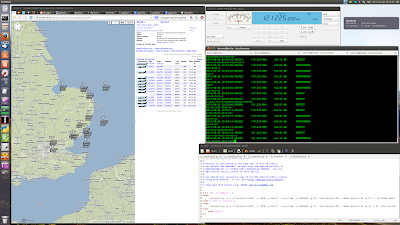 The green stuff in the terminal itself is OnSense. It spews forth notifications so you can tell at a glance what you're listening to.  I like to keep an eye on things (bugs?) by keeping grig in view and having both OnSense and grig talking to the AOR receiver via rigctld.