Today I've been receiving the HABANERO balloon from Holland, with my AOR-8600mk2 and a discone antenna in the loft.

I've been seeing if I can decode the Kingsley HAB with the HackRF SDR and gqrx feeding fldigi-HAB.

The HackRF is connected to a AR-8600mk2 discone via a UHF bandpass filter and a preamp (at the wrong end of the coax).  Both the HackRF and AOR-8600mk2 share this feed by means of a 2-way combiner.

I'm not getting any good decodes yet with the HackRF, but the AOR is doing OK. 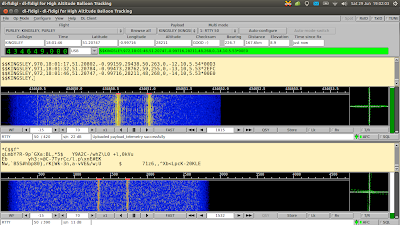 The HackRF Jawbreaker kindly sent to me by Michael Ossman arrived on my desk at work on Monday morning. I have been very lucky as there were only 500 beta boards made and I applied for one after he tweeted that there were some left over after the coupon codes he'd handed out at Toorcon had been redeemed.

Shortly before leaving work I remembered that I needed to disconnect the on-board 900MHz band PCB antenna enabling the use of an external antenna connected to the board mounted SMA socket.  The procedure for doing this (described here) involves cutting a PCB track, wisely marked on the board with an arrow.

It has been a long time since I attempted delicate surgery on a PCB, so long in fact that every has shrunk considerably and I could barely see the trace.  I hoped to find some in the lab who had the skill to do the job for me, but I had no such luck.  Most of the guys whom I would have asked have been laid off and those that remain had been dispatched to assist on other sites.

In the lab I found two microscopes that looked useful and a scalpel. After rummaging around looking for some anti-static straps I had a good look at the board with the microscope that seemed to provide the best illumination and view.  Unfortunately, the scope didn't seem to provide enough clearance to work on the board, so I had to move to a different workstation in order to actually wield some tools.  This other scope was much trickier to set up and I couldn't get a proper binocular view so I settled for just using my good eye.  This gave me a somewhat oblique view of the target area but at least gave me access to work on the board.

I decided that I'd try and wick off the solder before going in for the kill with the scalpel.  I was somewhat perturbed by the unsteadiness of the soldering iron tip and  gave up almost immediately with that idea.  Most of the solder remained on the trace but seemed to have balled up a bit at the ends, leaving me fairly confident that the track shouldn't take much cutting.

I spent a couple of minutes lightly scraping at the track with the scalpel before I caught a glimpse of some shiney copper in a place where I had not previously seen a reflection.  I panicked at that point, as I wondered how many layers the PCB had, and if I'd dug all the way through to an internal trace and damaged that.

I moved the board back to the other work station, but found it impossible to judge whether I had:

I took the board home figuring that I'd get it running and hope it worked.  It did. I was able to receive broadcast FM stereo at around 104MHz (although those signals are so strong It's hard not receive them).  To try out the sensitivity a little better I tuned into a military satcom transponder downlink on 255.55MHz and was able to faintly hear a spanish speaking south american pirate station on FM.  This is one of the signals I routinely use to check that my SDR receivers are functioning well.  With a good setup, I expect to be able to distinguish the increased noise floor of the transponder downlink when no signals are being relayed.  The active stations meant that the transponder's receive gain was reduced and that the downlink noise floor was indistinguishable from the background noise, which seemed to be quite high.  I had the hackrf sampling at 1MHz and this is a higher sampling rate than I would normally use for receiving weak signals.


It seemed that the board was working well enough for reception, but that didn't convince me that the hatchet job had worked out OK, so I decided that I wouldn't attempt to transmit at all until I'd confirmed that the track was properly cut.  I figured I'd take the board back to work when I could get a second opinion from someone who was familiar with the inspection gear in the lab and more importantly, could perhaps sort out any mess I may have made.

I did that today and they confirmed that I'd pulled of the job with Ninja precision.  The force must have been strong with me on Monday as it seemed to me to be like trying to circumcise a flea with a bulldozer.

The following photo was taken through the inspection scope and shows my handy-work. 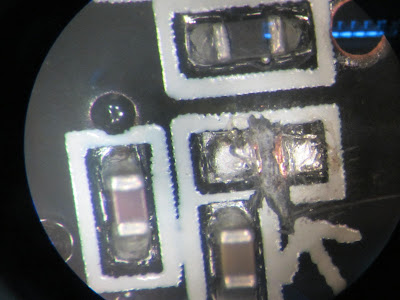 Finally, here's an image of the Jawbreaker installed in its temporary home.  This isn't the first radio of mine that has been housed in a cardboard box. 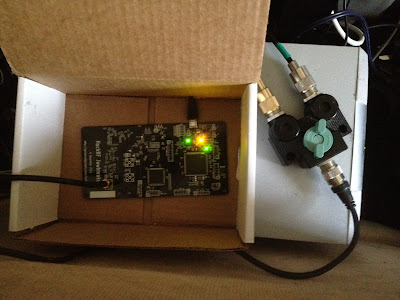 Having (re)installed (due to idiocy) Ubuntu on my shack machine, I fired up the build-gnuradio script and built gr-airmodes. Some time later, I noticed the following WTF.

I hope that this is some quirk in the message decoding.  I wouldn't fancy trying to understand that if my life depended on it!
Posted by g0hww at 21:36 No comments: 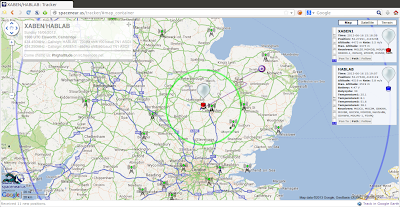 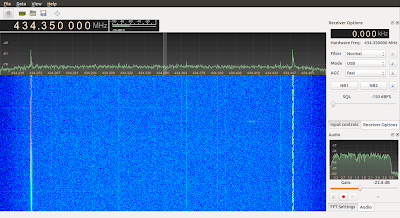 It might sound like Mork calling Orson, but its another HAB.  This one launched from Cambridge, just to the west of me, so it is coming in nice and strong. 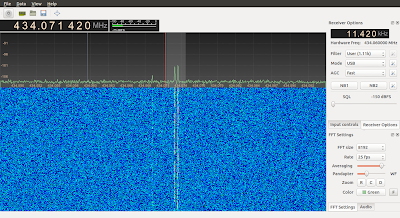 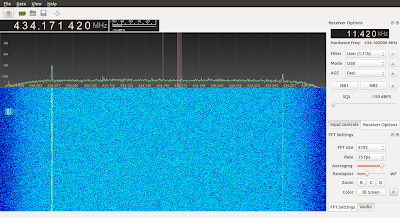 NANU's not got much to say for itself:

I've been receiving RTTY from the balloon BALCAN-ONE-A, with my AOR-8600Mk2 this afternoon. 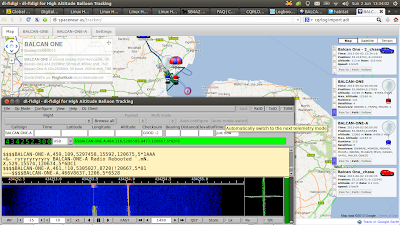 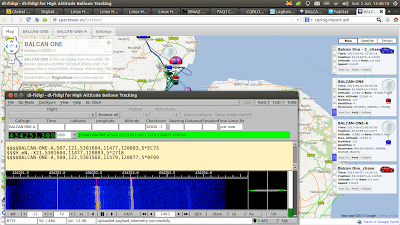