Add a file to the ~/.config/Gpredict/trsp directory, with the following contents:

With the keps for FUNCUBE added to gpredict and with the really cool recently added support for hamlib compatible remote control of gqrx it's easy enough to find FUNCUBE with a Funcube Dongle Pro+ as a receiver.  I'm using a homebrew 2m Turnstile-With-Reflectors in the loft as an antenna. 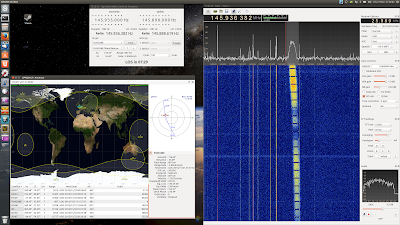 Update:
I'm going to have a listen for ChargerSat-1 (more) too.  The trsp file for that is called 99912.trsp and has the following contents.

You mixed UP_LOW and UP_HIGH which confuses gpredict. I fixed this in my version and now it works fine.