QtRadio running on Ubuntu 13.04 with USRP

After a day slaving over a hot compiler, I managed to get QtRadio working with my USRP B100 and BasicRx.  I achieved this using code from the ghpsdr3-alex repo.

It looks good on a 27 inch  WQHD monitor with a 2560 by 1440 pixels screen.  I have it resampling from the default 250kHz rate down to 192kHz.  It does seem fairly CPU intensive though, hitting a load of 5.0 to 6.0 on my new Haswell I7 machine, with a modest bunch of other applications running that don't reach a load of 1.0 between them.  I built using the alex-conf.sh script instead of using configure itself, so I've hopefully got an optimised build.  I built QtRadio for release in QtCreator.

Here's a screenshot of some 30m activity. 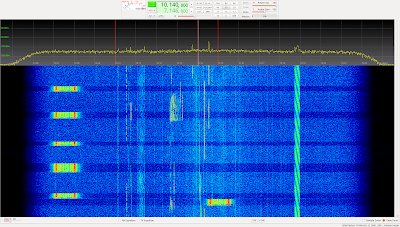 To get this working I had to bodge the usrp_server to detect my B100, which it didn't do initially. It turns out that it was hard-coded to expect a USRP1 device.  The following patch shows the simple change required to make it work with the B100.


Once I'd built everything, I had to run two server processes before launching QtRadio.  I invoked them like so: