First night of the shadow-beacon experiment.

I've submitted the first nights logs for the shadow beacon experiment. I was initially confused about the desired format but on careful reading of the FAQ, it became apparent that 'arbitrary' formats are acceptable, so went for a filtered dataset from the aprx-rf.log file that showed only receptions from my satgate, G0HWW-4 containing the string RS0ISS. The full logs, with time stamps are here.

At first I didn't notice anything unusual, and then I realised that there were two digipeaters active.  The first clue was in a beacon from Nigel, G4DCQ:

I wasn't really sure what Nigel meant, but then I noticed subsequent messages were being relayed by different digipeaters and some were coming via 3 hops:

If you look at the telemetry report for G0HWW-4 you can see an increase in activity the day before the experiment started, and another increase for the first day.  If you are viewing this page some time in the future, look for telemetry for the week starting 2013-01-28.

Update: Some time ago I received a QSL card. 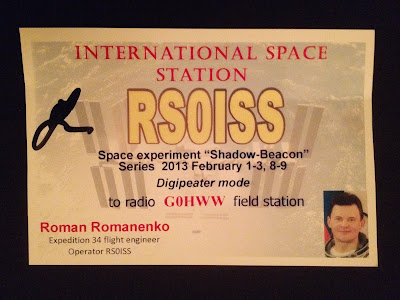